The UDH-8-Ultra allows you to put up a total of eight singers or instruments simultaneously on fixed wireless channels. It is a reliable all-in-one system that can go from a choir performance to a band gig without missing a beat. Free yourself from wires on stage for public speakers and performers alike.

There are no reviews yet. 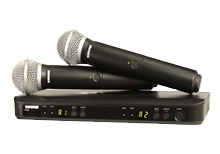